What is a ‘GRAIL’ watch and why?

I recently posted a thread about a recent ‘grail’ acquisition of mine on a watch forum and it was interesting to see how many people interpreted the meaning of a ‘grail’ watch differently.

‘Grail’ is a term I think is often over used in WIS circles, many people seemingly acquiring their ‘grail’ only to be seen to be flipping the watch in almost no time at all!

To me a grail watch is one that you usually covet for ‘some time’ but that you will never sell.

Typically grails are watches that are sought after by collectors for long periods. However I will say ‘usually’ covet for some time as I believe there are instances where a watch becomes available that you never thought would, or that you never even knew existed,  but instantly generates a level of desire and need similar to that of something coveted for a long period.

However for it to be a true grail it must fall into the category of never to be sold.

The only instances I believe where selling a grail may be acceptable are during times of financial hardship….and that does not include in order that you may buy another watch!

The argument may be put forth that selling a grail is acceptable if it is to purchase another ‘better’ grail. But does that mean the watch was a grail in the first place, or simply another watch in the collection ladder?! To me it is not a grail but simply one of your favourites in your collection that you would like to hold onto, but inevitably will let go if something better comes along.

I also find that grails take all shapes, sizes, makes and designs. My collection is made up of mainly rare vintage Rolex and Tudor sports watches but some of my grails are different animals altogether.

I have the watch I was given by my parents for my 18th birthday – a 9k gold Rotary dress watch that cost about £70 – my first ‘nice’ watch, which although now looks a little cheap and chatty alongside my collection I wore with pride during my first real job and it won’t ever be sold.

I also have a Paul Newman Omega Speedmaster. No not the Paul Newman ‘design’ but a watch actually from Paul Newman!! More on that in a blog post at a later date…

I have an Omega Speedmaster pre-moon watch that comes complete with box and papers that are dealer stamped and dated the day I was born – now what are the odds on ever finding that and how could I ever sell it?

Various others far too boring to tell you about except that my latest acquisition that I termed as the grail watch for the purpose of the forum thread was a simple 1965 Rolex 5513 Gilt Dial Submariner. 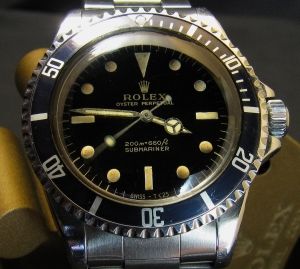 Not the rarest watch in the world nor the most expensive, but one that I spent two years looking for and that had to have a perfect dial and then completely by accident it turned up at my front door. Having always regretted selling the last mint gilt dial example I had I won’t be making that mistake again!

So what does a grail watch mean to you, why and what are your grail watches?

I think we would all be interested in hearing about them…